Possession of Dangerous Drugs in Arizona 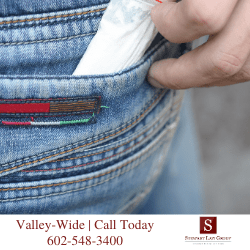 Certain drugs are classified as “dangerous” by the Arizona government. As a general definition, most non-marijuana drugs are defined as dangerous drugs, including methamphetamine, hallucinogenic mushrooms, lysergic acid diethylamide (LSD), clonazepam, mescaline, and any drugs containing these or similar compounds. Therefore, this includes most hallucinogenic substances and stimulants, as well as many benzodiazepines and other drugs. Without a Phoenix dangerous drug possession attorney, you may face serious jail time simply for possessing these drugs. The team at Stewart Law Group can help, schedule your free consultation today.

Knowingly possessing, using, selling, or intending to sell dangerous drugs is a crime. Even having the equipment to manufacture these drugs is illegal, as is transporting them. Possessing any amount of LSD, methamphetamine, amphetamine, or phencyclidine (PCP) is a class 4 felony, carrying a minimum prison sentence of 1.5 years.

A court may choose to place the guilty party on probation, holding off on designating the offense a misdemeanor or felony until the probation is over. This is a route often taken when an offender is addicted to dangerous drugs. Many first-time offenders are eligible for Treatment Assessment Screening Centers, or TASC. TASC is a non-profit helping people in Arizona with mental health and substance abuse problems.

First-time offenders can often serve their probation at TASC, having their felony charge reduced to a misdemeanor, and sometimes having their charges dismissed altogether. Participants in the program are required to pay their own fees and drug tests. The government can sometimes offer assistance. A failure to complete the TASC program, or violation of probation, results in being taken into custody while the court assesses the case.

A first offense for possession of dangerous drugs can mean up to 3.75 years in prison, especially for offenders deemed ineligible for TASC or probation. A second offense means up to 7.5 years in prison, and a third offense up to 15.

What to Expect from a Dangerous Drug Possession Sentencing

Determination of prison time depends on the amount in possession at the time of arrest. For every drug, there is a threshold amount. Possessing any quantity above the threshold amount is considered intention to distribute and carries with it significantly higher penalties. Possessing a dangerous drug for sale is a class 2 felony, resulting in a minimum prison sentence of 4 years.

The threshold amounts of common dangerous drugs in Phoenix, Arizona are as follows:

Manufacturing dangerous drugs is also a crime. A person found guilty of manufacturing a dangerous drug faces class 4 felony charges. Depending on the drug in question and the amount manufactured, this can be a very serious charge, carrying stiff fines and prison time. Facing a these types of charges without an experienced Phoenix dangerous drug possession attorney defending you is not advised.

Dangerous drugs are heavily regulated by the Arizona government because of their negative health effects and addictiveness. Accusations of possessing, manufacturing, or selling drugs deemed dangerous are taken very seriously by the state of Arizona. To ensure you are defended against any charges related to possession of dangerous drugs, contact Attorney Scott Stewart at the Stewart Law Group today.