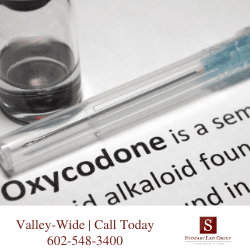 Knowingly possessing, using, selling, manufacturing, transporting, fraudulently obtaining, or administering to another person a narcotic drug is illegal in the state of Arizona. In general, a narcotic is any drug affecting one’s mood or behavior. Several drugs are classified as narcotics by Arizona’s government – and are therefore illegal in Phoenix -, including cocaine, heroin, opium, oxycodone, and morphine. Most painkillers are considered narcotics when obtained, sold, or taken improperly. The improper use of narcotic drugs is a felony and anyone facing a related charge should speak with a Phoenix narcotic possession attorney.

Felony charges as a result of narcotic drug possession can have serious consequences in Arizona. Many offenders face prison time, particularly repeat offenders. Fines are almost a guaranteed consequence, typically costing thousands of dollars, and felony charges greatly impact an individual’s record. Professional and educational opportunities can be lost as a result of felony narcotic drugs charges and convictions, and restrictions are placed on firearm possession. In Arizona, repeat felons stand to permanently lose their ability to vote as well.

Narcotic possession is also a federal crime. Those convicted of possession of narcotics in Arizona can face federal charges in place of or in addition to state charges. This means more prison time, steeper fines, and far greater consequences.

Possession and Intention to Sell

Some narcotic intention to sell threshold amounts are as follows:

For many first-time offenders, prison time doesn’t happen. This is especially true if the individual has a drug addiction or possessed less than the threshold amount. In addition, if a first offense, he or she may qualify for probation. This often includes community service and regular mandatory drug testing. Many first-time offenders are sent the route of Treatment Assessment Screening Centers, or TASC.

TASC is a non-profit organization that works with those accused of possession of narcotics or dangerous drugs. The organization offers mental health and substance abuse treatment, and first-time offenders are often eligible for TASC. Successful completion of the program can result in a reduction or even dismissal of charges. However, failure to complete the TASC program or violating probation results in being taken into custody while the court assesses the case.

All drug possession cases depend on the accused knowingly possessing drugs. Our Phoenix narcotics possession Attorney Scott Stewart has won many cases by proving the accused did not, in fact, have knowledge of their transgression. While being accused of possessing, manufacturing or trafficking in narcotics is serious, it isn’t the end of the line. Particularly with first-time offenders, the government of Arizona tends to be lenient. Hiring an experienced Phoenix narcotics possession lawyer can prove vital to getting a favorable outcome as a first-time offender. If you have been accused of possessing narcotics in Phoenix or anywhere in the state of Arizona, Attorney Scott Stewart at the Stewart Law Group can help.