Fleeing From a Pursuing Law Enforcement in Phoenix, Arizona

It is of the utmost importance to pull over immediately when a law enforcement vehicle signals for you to stop. Also, don’t obstruct the flow of traffic when pulling over. Move to the side of the road and wait in the vehicle for the officer to come to your window.

Fleeing from law enforcement and subsequently being involved in an accident carries even more severe consequences. By not pulling your vehicle over, your intention might have simply been to avoid a traffic ticket. If, during your flight, you strike another vehicle or are involved in a crash that results in the death of another person, the consequences can be grave; you can even be charged with first-degree murder. The Phoenix criminal defense lawyers at Stewart Law Group can help you fight these charges. Contact them today.

The most common charge leveled against those unlawfully fleeing law enforcement in Arizona is the class 5 felony charge. A class 5 felony is punishable by at least 6 months behind bars, with sentences up to two years. Sometimes, probation might be considered in lieu of prison time. Having a driving-related felony charge on your record also puts you in a more vulnerable position, should you end up in further legal trouble involving your driving, which is why it is important to contact an experienced criminal defense lawyer near you if you are facing such charges. Prison time becomes unavoidable if you accumulate several driving misdemeanors or felonies. Charges relating to assault or recklessness also increase the chances of prison time as will if you were driving under the influence while fleeing the scene.

Any good criminal defense attorney will tell you that the best defense against a charge of unlawful flight from law enforcement is ignorance. If the officer attempting to make the defendant pull over is not in a clearly marked vehicle, the prosecution often has no leg to stand on. The charges of unlawful flight from law enforcement or fleeing from the police rely on the willfulness of the flight, and defendants who didn’t notice a law enforcement vehicle can’t be charged. Passing through a noisy construction site or having one’s music turned up loud can result in not hearing a police siren.

Drivers may also believe the police car pursuing them was in pursuit of somebody else. 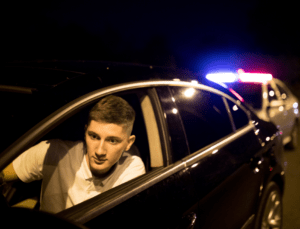 Accidentally fleeing from law enforcement often happens on highways. Pulling over safely in these environments can be difficult, and a high volume of fast-moving traffic is common. Drivers being pulled over on the highway sometimes take an exit to find a safer place to pull over. Some law enforcement officers interpret this as flight, leading them to add unlawful flight charges to what was previously only a speeding ticket.

Should you be charged with unlawful flight from law enforcement, it is imperative to contact a qualified unlawful flight attorney as soon as possible and share the circumstances of the incident. High-speed traffic and noisy areas can create circumstances resulting in accusations of flight. Often, these charges can be explained as simple mistakes that could be proved by footage from the officer’s squad car camera. If the police officer broke the law at any time during the arrest, this too is possible grounds for the dismissal of charges.

Unlawful flight from law enforcement is a serious charge. It is also a difficult charge to prove, and could be due to a misunderstanding or misconduct by the police. In these circumstances, it is important to know your rights. Contact the Stewart Law Group to make sure you are represented fairly and are made fully aware of your legal rights and responsibilities. With offices conveniently located in Phoenix, Peoria, Glendale, Chandler, Avondale, and Surprise we have qualified unlawful flight attorneys throughout Arizona with the ability to meet with you to discuss your case. 602-562-5000

“Colin Bell and his team handled our case with superior expertise and professionalism. All our questions and concerns were answered in a timely manner by Colin who genuinely took the time to help us through a stressful and scary time. Thank you to everyone at Stewart Law Group. We are very happy with the end result.”